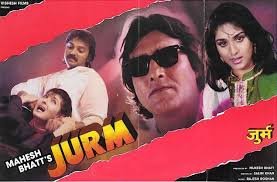 The song jab koi baat bigad jaaye is from the 1990 hit action drama called Jurm. This romantic duet from the film became a huge hit at the time of its release. This song was sung by Kumar Sanu and Sadhana Sargam. The song was written by Indeevar. The song is 1 minute 39 seconds long. The movie stars Meenakshi Sheshadri, Vinod Khanna, and Sangeeta Bijlani in the leading roles and even the song is picturised on these actors.

The song talks about love in its smooth floor forms. It literally translates to “if anything wrong happens to me ever I want you to remain by my side, my dear”. It’s a promise from a lover to a lover, staying together even in the darkest of times and standing up for each other whenever needed. The song was also recreated several years later by Pakistani singer Atif Aslam and Indian singer Shirley Setia and DJ Chetas. Even this version of the song was greatly received by the audience and was highly acclaimed. This song is 4 minutes 13 seconds long. The song was released in 2018 and gave a refreshing touch to this old evergreen song.

Ho chaandni jab tak raat
B… B BA# B