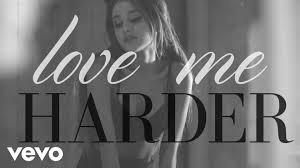 These music notes are of “Love Me Harder” song by Ariana Grande an American singer and The Weekend Canadian Singer from her album My Everything. Genre of the song and sheet notes is Republic Pop and R&B with electro-heavy chorus touch in US, the song was ranked at number seven in the Billboard Hot 100, which made this song Ariana’s fourth consecutive top-ten album and also making her artist with the most top-ten albums singles. The song also features double entendre meaning of rough sex.

It was written by Max Martin, Peter Syensson, Savan Kotecha, Aali Payami, Ahmad Balshe and Abel Tesfaye. Production was done by Peter Carlsson and Payami. The vocals were provided by Syensson. According to the sheet music, the song is mostly composed in the key C# minor. Tempo was moderate with ranging to 100 beats per minute.  Vocals of Grande were from note E of 3 to F# of 5. Genres were synth-pop & R&B ballad whose start was mellow but chorus with a throbbing and electro heavy with a little guitar riff and throughout the tract big vacuum-esque was used.

In lyrics, Grande was demanding romantic satisfaction with a touch of double entendre about rough sex. In the start of the Ariana Grande demanded her man to satisfy her by , pleasure, lip biting bliss. The song had a unique taste of double entendre which makes it different from other songs.

In the United States, When after having a couple weeks being Under  the Hot 100 Singles chart, this hit “Love Me Harder” had its official debut on Billboard Hot 100 at 79.  following week, it also jumped to 57 and in its third week it again moved up to 37, becoming The Weekend’s 1st top-40 single song on the chart.