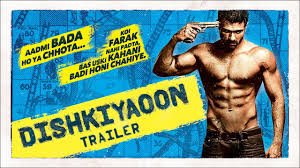 Tu Hi Hai Aashiqui is a Hindi song from the film Dishkiyaoon, released in 2014. Arijit Singh and Palak Muchhal are the singers of Tu Hi Hai Aashiqui. Palash Muchhal is the composer of Tu Hi Hai Aashiqui, and Sanamjit Talwar is the lyricist or song editor. Palash Muchhal is the music director for Tu Hi Hai Aashiqui. Sunny Deol, Harman Baweja, Ayesha Khanna, Prashant Narayanan, and Aditya Pancholi star in Tu Hi Hai Aashiqui. Eros Music released the audio for Tu Hi Hai Aashiqui on March 28, 2014. Dishkiyaoon is a 2014 Indian Hindi-language crime action film written and directed by debutant Sanamjit Singh Talwar and produced by Shilpa Shetty and her husband Raj Kundra, as well as Eros International. Harman Baweja, Ayesha Khanna, Aditya Pancholi, Sunny Deol, and Prashant Narayanan star in the lead roles. The plot revolves around the Mumbai underworld. The film was originally scheduled to be released on January 10, 2014, but it was delayed and was finally released on March 28, 2014. The film has also been officially made available online. The film was filmed in Mumbai and in Europe. On October 14, 2013, the film’s first trailer was released. Dishkiyaoon’s music was composed by debutant Palash Muchhal for two tracks, Sneha Khanwalkar for two other songs, and White Noise Productions for the other. Sanamjit Singh Talwar composed the soundtrack’s lyrics. Arijit Singh and Altamash Faridi perform a remix of the song. The film received “fair” occupancy across its 1500 Indian theatres, outperforming the week’s other two releases, O Teri and Youngistaan. On a Rs 39.0 million budget, the film grossed Rs 45.8 million in India. The composition of the song is beautifully done, which makes it very popular amongst pianists around the nation who want to learn and play piano notes of this amazing track.

A B B A A A A
Aadhi hai reguzar

D C B B B B
Aadha hai aasman

D C B B B B
Rooh mujhse baandh le

D C B B B B
Baahon mein tham le

REST ARE SAME AS ABOVE